2. My favorite movie: Charlie and The Chocolate Factory

3. My favorite book: Are You There God, It's Me Margaret By: Judy Blume

6. What I used to think I would name my kids: Jamie and Joey

7. Games I used to play: Backgammon

9. I thought I was a loner as a child, but looking back I really wasn’t.

10. I didn’t think I was ornery as a child, but looking back I probably was.

11. Something I did and I never got caught: Hmm I really can't say.

12. Something my mom thought I’d never grow out of: Being Ornery

13. My favorite song: Pour Some Sugar On Me by Def Leopard

15. My earliest memory: Going to Grandma Cooks house on Elm Street and running from house to house during trick or treat and coming back with a pillow case full of candy.

16. Something I did that I still get teased about: Dancing on the TV as a toddler or sitting ontop of the refrigerator.

17. My favorite outfit from childhood: Leg Warmers, Mini Skirt & Vest with Blouse. Of Course had to have hair up in a ponytail on the side of my head instead of in the back.

18. Something I wish I could go back and change: The way I treated my mom as a teenager.

19. I was ridiculously old when I finally realized that: Life isn't always as easy as it was when you're a little kid.

20. My greatest achievements: My kids and my husband.
Posted by Janean Campbell at Sunday, October 29, 2006 No comments:

So You Think You Can Scrap Challenge #3 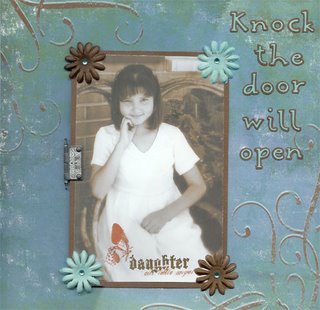 The only requirement for this weeks challenge was that you had to use the word "knock". The word knock could be used in any of it's form, knock, knocked, knocks, "Knockers". I actually considered using knockers, as I had breast augmentation surgery in 2004 and I had a really good idea. I changed my mind because I didn't know if this would be an appropriate layout for the contest. I was fully clothed in the photo, but some may have taken offense to it. Instead I chose to use this layout. The photo is hinged as to resemble a door. There's hidden journaling behind the photo. The journaling is below.

Knock The Door Will Open...

She was first diagnosed three weeks before her fifth birthday. Everything that I had experienced in life had not prepared me for the words that the doctor would say..." We think your daughter has a brain tumor."

The next week was a whirlwind of confusion. We found ourselves at The Children's Medical Center, in Dayton, OH, forty-five minutes from home. Tests..MRI's...more tests...The verdict? ... Medulloblastom, a malignant brain tumor in the fourth ventricle of the cerebellum.

Within a day of admittance, she underwent surgery to place a shunt in her brain, capable of draining the cerebral spinal fluid from her head that had built up because the tumor was blocking the path of drainage. The following morning, she was to undergo a thirteen-hour brain surgery to attempt tumor removal. The neurosurgeon said that the surgery would be tedious and dangerous. The tumor was resting against the brain stem, and one wrong moved could cause the brain to stop functioning. "Sometimes, the mere procedure of opening the skull sends the brain into shock, forcing it to shut down," he said.

While she slept in her hospital bed the night before this surgery, I sat in a rocking chair by her side...thinking and praying and thinking and praying some more.
We had been blessed with her life as a gift. Adopted at the age of thirteen days old, we gave her a name, and she became our daughter. She taught us of an immeasurable love.

As I rocked and prayed by her side that night, I was blessed with the sudden touch of calm and peacefulness. Only God knew the life before her. Only God knew of the suffering she would endure. Only God knew the plans for her life. "God", I prayed. "If her life will be unbearable because of this disease, I can understand and accept why you would choose to take her from this earth, back to your heavenly home. All I ask, is that you give me more time to be her Mother....just a little more time."

The surgery went well the next day. After only eleven hours, and not thirteen, they were able to remove all the tumor able to be seen by the human eye. She would next undergo radiation treatments and chemotherapy, but first another surgery to place a catheter directly into her blood stream at her chest, to administer her medication.

It wasn't long before we were home and the long days of travel back and forth to Dayton for treatments and doctor's appointments began. Everyone fell in love with her spirit at the hospital. She touched people everywhere sent went. And so many people touched our lives with their thoughts, and love, and prayers. The days turned to weeks and the weeks turned to months, and nine months later her treatments were finished.

Her prognosis was as good as could be expected. If a reoccurrence did not take place within the first five years, she had an optimistic chance of long-term survival. Although it was not without incident, the next four years flew by. Still subjected to regularly schedule check-ups and tests, our lives settled into a sense of normalcy. We were faced with learning disabilities, hearing aids, and growth hormone injections, all side-effects and results of her treatment; but life was grand. I was given more time to be Larissa's mother.

She flourished, she grew, she inspired, she gave hope; but all came to a crashing halt that August day in 1999. All-to-familiar symptoms began to present themselves and the dread trip to the hospital was made. After an MRI, our suspicions were confirmed. The brain tumor had reoccurred; but this time it had grown into her brain stem.

Although, not as overwhelming and unfamiliar as the first time, the news was still devastating. We had been so close to the five-year milestone for recovery.

This time Larissa was admitted to The Children's Hospital in Cincinnati, two-hours from home. Surgery to remove the tumor was followed by more chemotherapy, and chemotherapy was followed by a stem-cell transplant. While having the stem-cell transplant, we were required to stay at The Children's Hospital in Cincinnati for three and a half weeks. When we arrived home, she was weak and weary. We had a period of one hundred days ahead of us that would require almost complete isolation from the outside world. The limited visitors that she was able to have, were donned with sterile-filtered masks to keep the "germs" away.

It was during this time, Christmas of 1999, that Larissa and I were given a wonderful gift. Her entire fourth grade class , all eighty-six of them, were bussed to the front lawn of our home. It was there from our front porch, that we listened to the entire fourth grade sing Christmas carols. Larissa's smile was radiant, and the tears slowly slide down my face.

As the days, weeks, and months passed she became weaker and weaker. Her ability to walk freely was taken away, and she was eventually given a wheel chair to move about. In July, of 2000 she was admitted to Children's Hospital in Dayton and diagnosed with Pneumonia. It later that week progressed to acute respiratory distress syndrome and she died July 31, 2000.

So You Think You Can Scrap Challenge #2 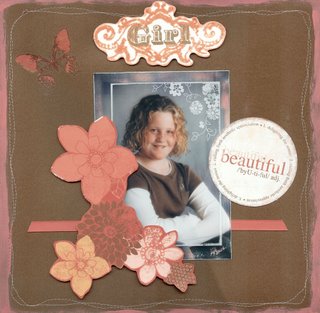 Well I made it to Round #2 of So You Think You Can Scrap. This weeks challenge was a doozie. We had to select a manufacturer and use only one of any thing by that manufacturer. I turned to my great friend Inkyinindy for ideas on manufacturers, she suggested I go with My Minds Eye. Wow, the supplies you can get into with this manufacturer. It was perfect for the photo I wanted to use and again, I feel it came out perfect. Now I'll just see if I make the cut this week.
Posted by Janean Campbell at Sunday, October 22, 2006 No comments:

So You Think You Can Scrap Challenge #1 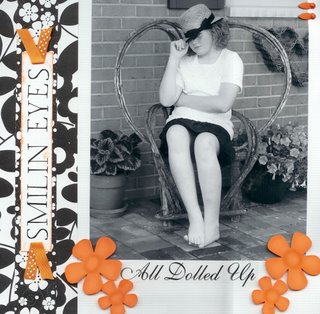 The ladies at scraplove.com are such great fun. All of them are so fun and friendly. I decided to join in on the So You Think You Can Scrap contest. The challenges are so fun. The first week was an ad challenge, which you had to use the posted ad for inspiration, as well as use the color orange. I chose to use the black and white photo and used orange accents. I was very excited with how it turned out.
Posted by Janean Campbell at Sunday, October 22, 2006 1 comment:

Check out my about.me profile!